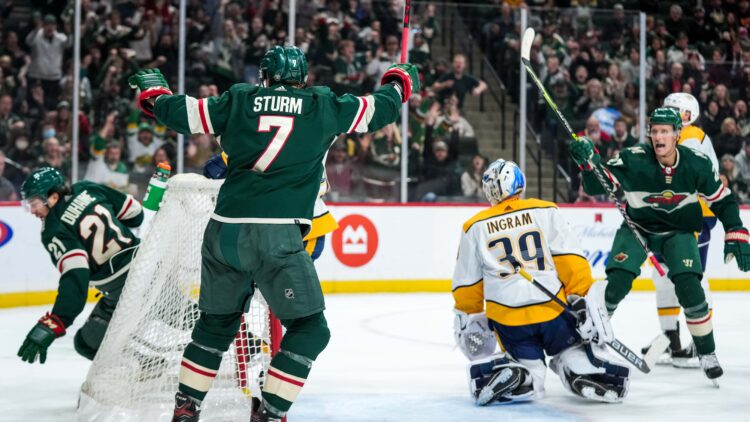 The Nashville Predators (2-4-0) scored three goals within the opening 13 minutes and held on to win 5-2 to give the Minnesota Wild (4-1-0) their first loss of the season on Sunday night. The Wild were 0-for-5 on the power play and allowed two shorthanded goals on six penalties, lowering their season penalty killing percentage to 69.6% (fifth worst in the NHL). The Wild have still not scored first in a game yet this season.

Roman Josi opened the scoring with a power play goal at the 3:45 mark of the first period. Josi had a goal and three assists in the game, including an assist on Ryan Johansen’s power-play tally two minutes later. Johannsen scored his second goal of the game to give the Predators a three-goal lead at the 12:25 mark of the first period. It was by far Minnesota’s worst period of the season, as they took four penalties and failed to create any sort of offensive pressure.

The Wild looked much better in the second period, especially their fourth line of Nick Bjugstad, Nico Sturm, and Brandon Duhaime. Minnesota generated tons of pressure in the second, resulting in Bjugstad scoring his first goal of the season with a nice shot on the rush.

Nashville then responded with goals from Filip Forsberg and Tanner Jeannot to go up 5-1. However, the Wild got some momentum back just at the end of the second period. Nico Sturm scored his first goal of the season to make it a three-goal game once again.

Some of the Wild’s offensive struggles on Sunday can be applied to winger Kirill Kaprizov. Although he leads the Wild with five assists this season, Kaprizov is often trying to do too much with the puck. He gives the puck up on the rush, takes penalties in the offensive zone, and looks scared to shoot at some times. Kaprizov, who has posted a -3 over the last two games, needs to play more relaxed if he wants to score his first goal of the season anytime soon.

After the Wild’s first loss they now head west and face the Vancouver Canucks (3-2-1) on Tuesday night at 9:00 p.m. CST. It will be the first time the two teams have met since the Canucks knocked the Wild out of the 2020 playoffs. Cam Talbot, who has all four of Minnesota’s wins this season, is expected to get the start on Tuesday night.